We went away for the weekend in June to the Calvert Trust, an activity centre in Devon. James, Ben, Max and I spent the weekend being the kind of people you see in adverts for happy families. We canoed, cycled, abseiled and swam.

The Calvert Trust is fully adapted for people with disabilities to be able to do all of the activities on offer. I think of it as Centre Parcs crossed with a youth hostel in a utopian inclusive world.

James and I took Ben there three years ago. Then, we’d had a good time and Ben had had some extraordinary experiences. It was the first time he had been down a zip wire, or canoeing, and he had liked those things, but he hadn’t enjoyed everything. He’d struggled with the unfamiliarity of it all and the amount of waiting involved in being part of a group. In addition to preparing all of his meals in a bathroom, and getting up with him during the night, James and I were also trying to entertain him between and during the activities. It was a worthwhile but utterly exhausting weekend for all of us. I wrote a blog at the time which is here.

This time we took a night carer with us. And Max.  And realistic expectations.

The combination of Ben being older and Max’s boundless enthusiasm meant we had a really good time. It was still tiring, but the kind of tiring that comes of having had a fun day with kids who have enjoyed themselves. We went canoeing with Ben sitting in a special seat. We went cycling on special bikes which was marvellous (apart from the moment when Max careered off into the biggest patch of stinging nettles in Devon). We connected Ben to a rope and dropped him from a perilous height, and then sent him down a zip wire. 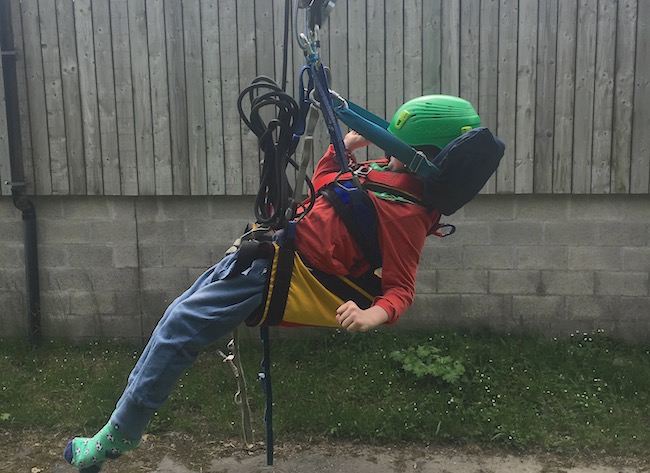 As Ben gets older it becomes hard for us to help him to take risks, to really feel a sense of danger and the physical rush of being thrown or falling, which he has always enjoyed. We always tell people he likes speed – when he goes ice skating we encourage the professionals to take him round as fast as they can. When he was smaller we could easily throw him in the air or push him hard on a swing and he loved it. It feels good to give him the opportunity to be dropped from height in a terrifying way – to hear him shriek and then laugh. Just because you’re disabled doesn’t mean you should be mollycoddled, gently pushed over surfaces with small changes in gradient for the rest of your life.

It wasn’t all wholesome fun. We still had to entertain Ben and cajole him into wearing a helmet. He spent some time watching an ipad while others were doing activities he’d made clear he wasn’t interested in. He and I went abseiling which he hated and it made him cry. I took him back to the room while Max went climbing because Ben was totally over physical activities by that point in the day. 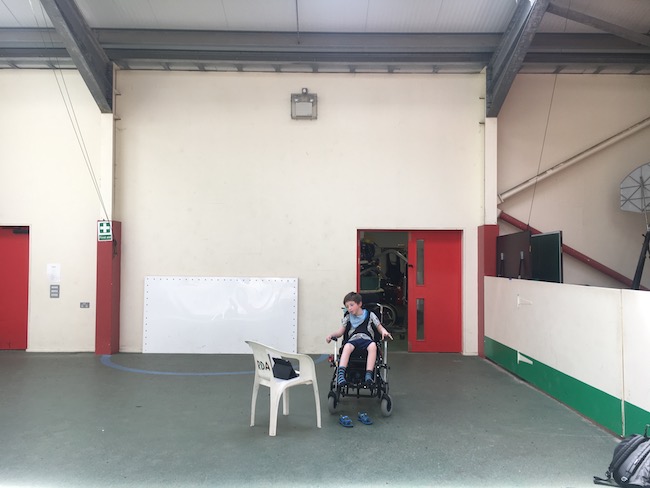 But really, that’s fine. It was fun! It was lovely to have a weekend of just me, James and two kids (Molly was at home with family). Away from the activities, we spent more time together as four than we have done for years. The comparison to our previous trip, when Ben was younger and less happy, was stark.

It was one of those trips when Max makes everything more fun. Ben is often happier when he is around and vice versa. New experiences don’t feel as high stakes when you have two children doing them – if Ben can’t cope with it and has to bail, Max will probably still have fun so it feels worth the effort or vice versa again. And it’s hard not to enjoy yourself when you have a six year old telling you that what you are doing is fun, awesome, and brilliant repeatedly, before, during and after each thing. 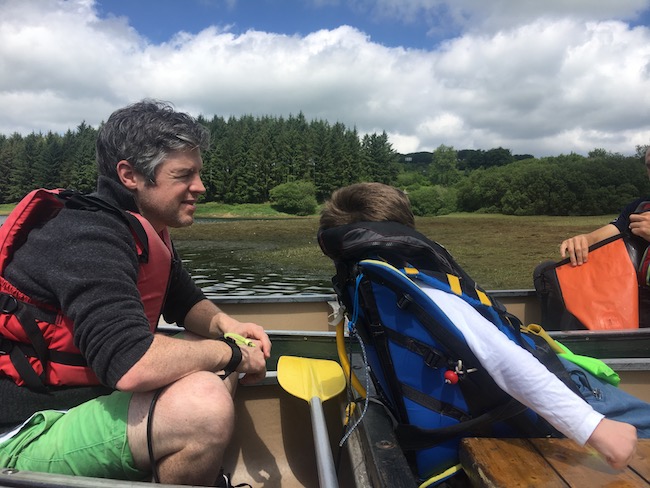 This visit it happened that ours were the only children there and the other groups were of adults with various impairments, some visibly physical, some not. Max made friends with some of the other guests, playing table football with them and asking them about their days. The kids stayed up late to watch live music, though we all refrained from the disco. I felt so strongly how idealistic a place it is – somewhere where everyone can do the same activities and eat in the same room, regardless of impairment. No-one needs to explain their disability. Conversations are about what people’s access needs are rather than what they can’t do. No-one stares. It’s how the world should be and we’re so fortunate to get to experience that if only for a weekend. 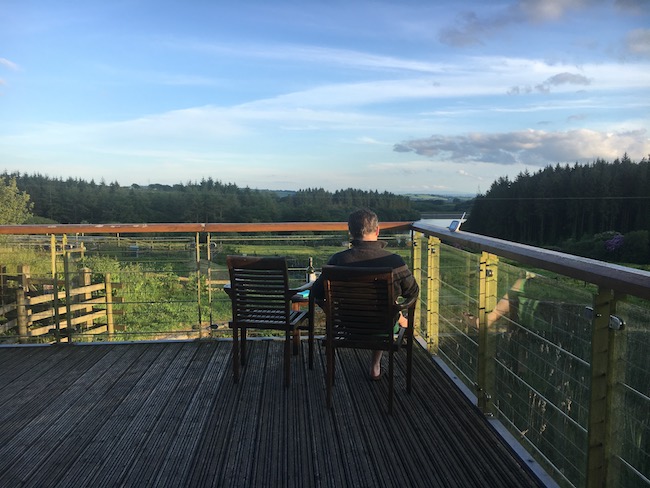 2 thoughts on “A Weekend Away” 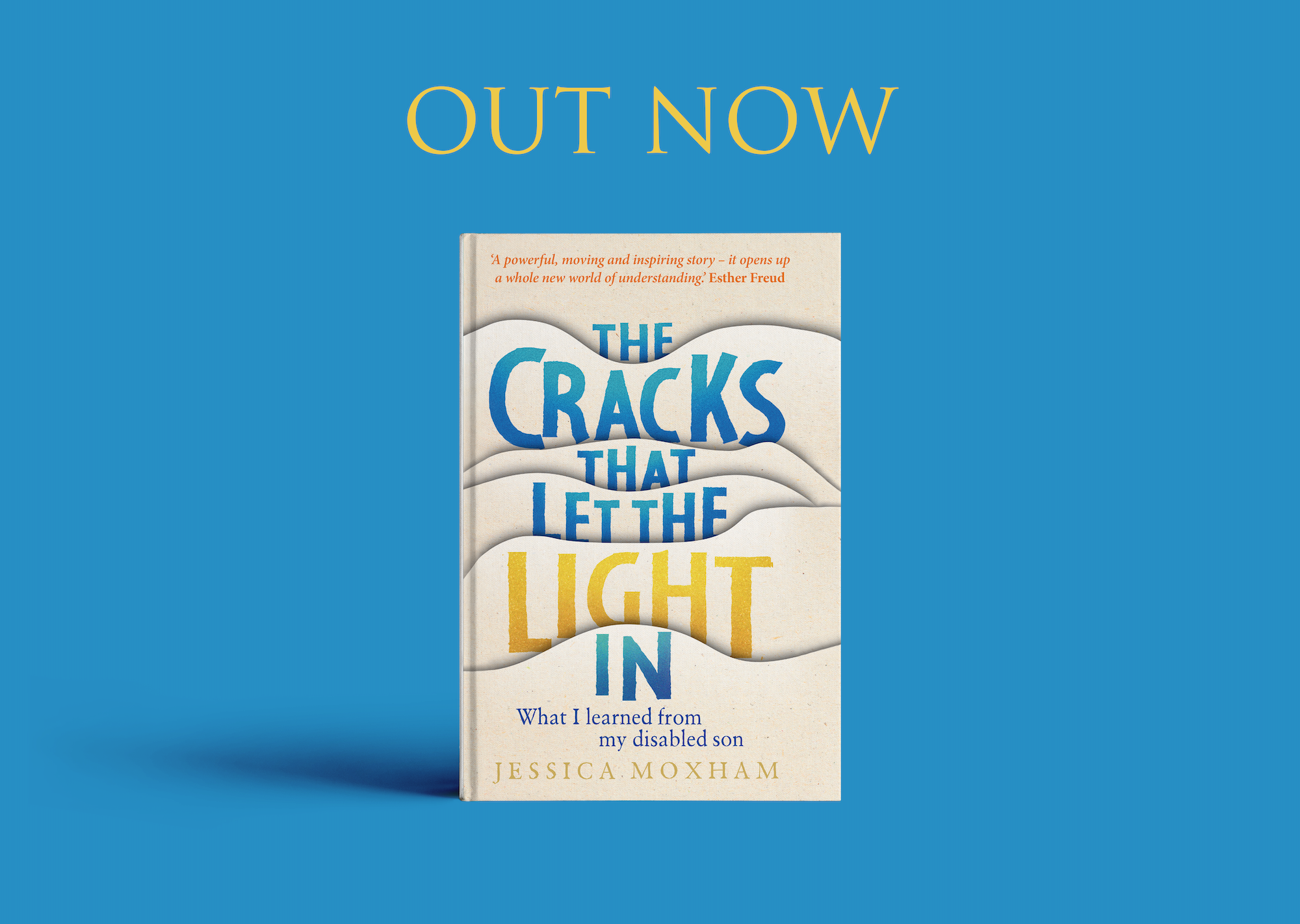 The nearest we’re going to get to foreign lands anytime soon is simit from our local Turkish bakery, which luckily is DELICIOUS
We just spent the weekend self-isolating briefly until we found out this boy doesn’t have Covid, just a fever and a cold. On the plus side, PCR test came back within 24 hours, and it all made it feel even more miraculous that we made it to a festival the weekend before. On the downside, he’s not yet better and so he’s missing his precious playscheme days 😢, instead hanging out in Molly and Isla’s fort #sonstoriesblog
Molly has just finished her first year of school and since we haven't been able to go in at all this year, we have only just seen most of the work she did there. She has LOVED school and in the school books it's clear she's been chatty: 'Molly told us about her brothers', 'Molly told the class that Ben has a new carer', 'Molly stood up in carpet time to tell us her brother Ben had his birthday'... accompanied by drawings of Ben in the garden, all of us at the park, Ben and her under a rainbow... She likes talking about Ben!
I just finished @estherfreud_’s new book, I Couldn’t Love You More, and it is a powerful, moving and inspiring story about three generations of women, their babies and their families. I loved it. (More thoughts in stories & highlights)
Dropping Ben at the playscheme that Max is currently not allowed to go to (🦠) and confusing everyone by delivering Ben back to the school that he left with such fanfare last week 🧐
In an absolute triumph of logistics and luck, four of us have made it out of London! To a festival!