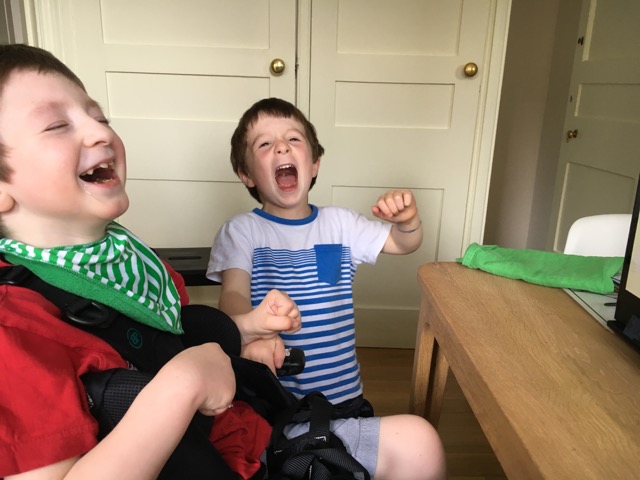 I’ve got three kids! I don’t have much time to write blogs! And we have moved house, again, so things are as relaxed as usual round here.

In amongst the chaos and many, many boxes, Ben has been continuing to use his eyegaze computer. It travels to school with him every day and then he uses it at home for a mixture of entertainment and communication. Ben is building skills in using his eyes and navigating around software on a computer, and much of this is by playing games or other activities that he finds motivating. Like everything to do with kids learning something, anything, it’s best done through play as far as I can see.

We have various activities that he enjoys on his computer; his favourites are, unsurprisingly, stories. Some of which are ‘multiple choice’ where he has to pick the right word to continue the pre-programmed story. Others are computer equivalents of audiobooks where the entire text of a novel is on the computer and Ben can choose the story he wants, select the chapter, and then it is read out to him (in stilted computer voice, but he doesn’t seem to mind). Crucially, he has to keep selecting ‘Speak Paragraph’ in order for the story to continue, meaning that he has to engage consistently.

Ben’s current favourite book to read like this is Mr Stink by David Walliams. We have the actual book and read it to him frequently (actually I don’t, generally because I’m often preoccupied with a smaller child, but others do including my dad who assures me it is great and totes emosh). Other times Ben sits at the table reading it to himself via computer. It’s brilliant.

We hadn’t foreseen quite how fantastic the computer is for Ben and Max to use together. The laptop is touchscreen and so they can play games like, for example, Splat the Clown where Ben can splat using his eyes and Max using his finger. There aren’t many activities that they can do together like that, with total parity.

The current hit, however, is the most simple of all. By navigating through various screens within the PODD communication software Ben can get to a page which just has Yes, No and Don’t Know buttons.

Through trying to gauge Ben’s reliability of answering yes or no to questions (Ben doesn’t have a totally reliable yes or no, which is a work in progress for him and something about which I could – and may at some point – write an essay…), James invented a game of asking him sets of related yes/no questions, some of which are totally ridiculous. It is a good way of him practising giving us a clear yes or no when we know he knows the answer. He is definitely making progress on this. The thing we didn’t expect, and which is in danger of slightly undermining our carefully constructed strategy, is that Ben is now giving us the ‘wrong’ answer because it’s funny.

Oh the laughs! The advent of this game has also coincided with Max hitting the zenith of his life so far where he can successfully make every member of our family laugh. Let me assure you that watching one of your kids make the other laugh is one of life’s pure joys. Watching Eli make BOTH of the other kids laugh is very, very lovely and makes my heart sing. All the feelings.

So it isn’t just James and me asking the yes/no questions, but Max too, and Ben bloody loves it.

Sometimes when Max is asking the questions Ben doesn’t answer. Then while we are waiting, he navigates out of that page which is autonomy in action, and is the physically disabled equivalent of a child wandering off because they have lost interest. He actually then went to a different yes/no page, through a different pathway in the software (which I didn’t know you could do), and then we continued. His ability to do this, without us mediating, is as pleasing to me as all the chuckling.