Max started school in September. It has made me think a lot about how we educate kids with disabilities.

Max’s school is a short walk away from home. It is a typical inner city state primary. Unremarkable for being similar to lots of other schools in London. Remarkable for being like many other schools which are also educating loads of kids with different needs, languages and backgrounds. I have been consistently impressed by how they have calmly settled thirty new kids into school and appear to be totally in control, while I struggle to keep three kids in any kind of order at home. Max has been learning at a furious pace – generally uncommunicative about his day, he’ll then slip in some comment about how to spell a word, or write something, or tell us about numbers in a way that shows he is really soaking up the things he is being taught.

One of the reasons I liked the school when we originally looked round was because it seemed to accommodate difference well – it has specialist provision for pupils with autism, it has a dyslexia centre. It has the kind of diversity of kids you would expect of an inner London school. I believe these things are important.

(Sidenote: a teaching assistant who we loved at Ben’s old school once told me she chose her non-disabled daughter’s school based on it having a lot of kids with special educational needs and being well known for inclusion. People like that make the world a bit brighter.)

Out of the classroom, and purely by chance, it turns out we live on the same road as two other kids in Max’s year and as we all troop up and down the hill every morning we have got to know each other. So within weeks of starting school Max was being invited over, and James and I were getting to know other parents. We bump into parents from the school in other local places and stop for a chat. Apart from this being really fun for Max, it has meant us being able to ask for favours; when Ben was ill, another mum collected Max for me and brought him home. This is new to us and it’s brilliantly straightforward.

I was worried about Max starting at a school where no-one knew Ben. Of course I was wrong to be concerned – within the first few weeks he had described his family with accompanying photos: ‘Me and Ben are lying in bed. Ben’s disabled and my bed isn’t that big so he sleeps downstairs’. Within the first half term the whole class had watched videos of Paralympic athletes and discussed overcoming adversity. As the teachers said at the time, the kids were too busy being impressed with Jonny Peacock’s speed to notice his lack of leg. Max has the confidence to explain Ben’s disability when he needs or wants to and he knows it isn’t negative or something to be self-conscious about, it just is.

So far Max’s school is everything we hoped it would be. It is enabling the small ordinary interactions of living in a community. And in that respect, it is really – and unavoidably – different to Ben’s school experience.

Ben goes to school five miles away. It’s a really good school, and he’s there because we think it’s the best school for him right now. It takes about an hour each way for him to travel there and back every day. That is not that unusual – kids at Ben’s school come from all over London, in every direction.

James, a carer or I take and collect Ben two days a week. We chose to do that, so we see his classroom and his classmates, and have chats with his teachers and assistants. The other days he gets a school bus, like almost every other child in the school since. We rarely bump into other parents at the school.

Years ago, we looked at Max’s current school as a school for Ben. They were willing to consider it, but he would have been the only physically disabled child in the school and they had no track record of teaching a child like him. We decided it was better for Ben to go to school further away that had proven expertise in teaching children like Ben, in helping them to communicate and in maximising their potential.

We think this was the right decision for Ben, but it means we removed him from his local community. It is only through our efforts to engage him in local activities outside school (and my reliably local family) that he will have any sense of belonging in our little bit of south London. As I have written about before, life is all about human connections and this is more important, not less, for children with disability for whom interacting is challenging.

In some ways this is where Max comes in, as an unwitting but ever reliable social conduit. He invites his friends over, and then Ben is surrounded by boys playing with helicopters. Those boys, and their mums, dads, sisters and brothers,meet Ben and then recognise him in the street. They ask questions and get to know him. We take Ben to the Christmas Fair at Max’s school, where he meets Max’s teachers, other parents and kids, and really enjoys the Salvation Army brass band (obviously).

As ever, the path of inclusion never runs smooth, and Ben couldn’t meet Santa at the fair because the grotto was up two small flights of steps. But never mind – Max told Santa he needed a present for his brother, who is disabled, and wasn’t there, and Santa handed it over. They both got books about the Lego movie so we are all now clear about exactly why Vitruvius (not that one) is so amazing. 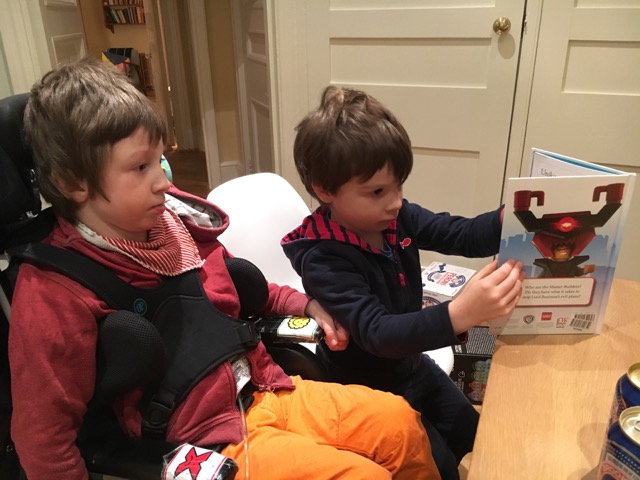 There’s an argument to be made that it makes sense to group children who need specialist input together (and no-one appreciates the expertise of really specialist teachers, speech and language therapists and technologists more than me). That it makes sense to have a critical mass of similar-ish kids in a school together. It’s kind of obvious, and I have sympathy with this point of view, not least because kids like to be with their peers and for some children, perhaps being the sole physically disabled kid in a school is not necessarily that bolstering an environment. I think it works well for Ben to be somewhere with kids that communicate like him, and professionals experienced in teaching kids like him.

It’s not good enough that at 8am every morning hundreds of children with special educational needs are being bussed around the city, sitting in traffic jams while they try to get an education, driving past the local kids who could have been their friends. It’s not good enough that the families of the kids on the buses don’t get to know local parents. How otherwise are they supposed to forge the kind of friendships that are based on mutual understanding of how you feel at 9am having used the cross voice at least five times to ask your child to put on their shoes/not get run over by a motorbike/stop walking on that bit of wall, when you have run to school as you tried to keep up with your child scooting too fast down a hill, and are now wondering if someone is going to give you a medal for remembering the bookbag?

Obviously, calmly loading your older child on to a bus arriving at your house at 8.15am can sound attractive in comparison to the 9am chaos, but is it right? Is it really the right way to organise an education system? Is it fair for disabled kids? And are we really doing right by our non-disabled children?

One thought on “Where kids go to school”