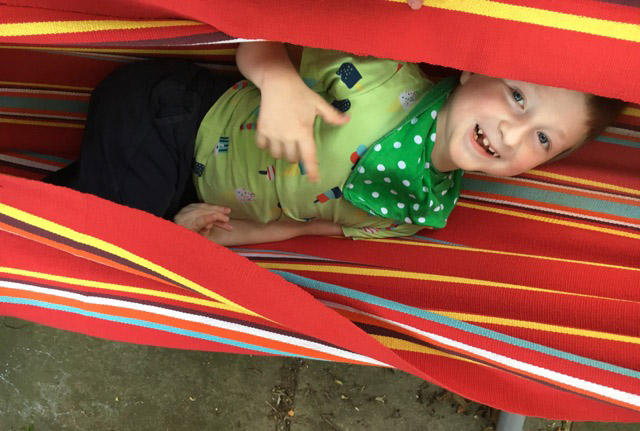 For any parent of a disabled child, the subject of respite is a bit fraught. Often because accessing any is difficult, and will have involved tricky conversations/numerous phone calls with various professionals. Partly because the logistics of organising it and physically getting the child there with everything they require are onerous.

But mainly because it’s a double-edged sword. On the one hand we would really like a break. On the other hand we feel guilty for wanting a break. We are on the knife-edge of knowing that the respite place we have carefully considered is able to take care of our child, but also thinking that no-one is going to be able to take care of them properly.

Almost two years after we were first referred for respite provision, Ben has just had his first overnight stay without us. The somewhat casual timescale allowed us time to get used to the idea, due mainly to the first hospice refusing to feed Ben pureed food so us (and yes, I mean us, social services having still not managed to assess Ben) having to find a different place. We agreed to the new referral, then went for a visit, then spent a couple of hours going through aspects of Ben’s care plan, and then stayed there with him for a weekend, then the time came for him to stay there himself.

It’s a nice place. It’s run by nurses, so feels quite medical, but that means they are totally on top of medication and not at all intimidated by disability. It’s purpose-built building with lots of space, bedrooms opening on to gardens, a huge room for craft, fun and reading. Loads of books and friendly people floating around doing interesting things. There are other kids and their siblings, volunteers making bugs and Gruffalos.

To give some context, I am generally quite relaxed about being separated from my children. We are lucky enough to have lots of family in London who are willing to look after our kids. For the first three years or so of Ben’s life he spent one night a week with my mum, he’s spent loads of weekend with his other grandparents. Max has had ‘sleepovers’ of up to five days with grandparents and my sister and her partner. Molly is somewhat testing the model by being more dedicated to breastfeeding than I would ideally like, but at some point we’ll manage to offload her too. But of course, these people are all in our family. And as Ben has got longer and heavier, and the kit he needs has got larger, it’s got trickier for him to stay anywhere that isn’t our home.

We have therefore shifted the model so James and I (perhaps with a child or two) can go away, leaving Ben in our house with various permutations of carers and family. We realise how fortunate we are to be able to do this.

What the respite hospice offers is an opportunity for us to stay at home and for Ben to stay elsewhere, allowing us to be one child down (which with three of them is a welcome release of intensity), spend more time with the other two, and perhaps get some of the stuff done that we have been planning to do for months but never have time to (e.g. unpack boxes from our house move 2.5 months ago, or actually tidy up our tip of a house). I am keen on this idea.

Except that it also involves Ben staying somewhere else without us or any other family, which makes me feel guilty and nervous.

On the morning of Ben’s solo stay we packed up everything he needed (a full car of stuff) and James and a carer set off. I used Molly as a convenient excuse to not be the one to do the drop off. I called the hospice to say they were on the way, and it transpired that there had been some administrative confusion that meant they weren’t expecting Ben until that afternoon. The idea that Ben was about to arrive for his first stay without us, and they weren’t expecting him, that they weren’t all standing around anticipating the arrival of Ben, made me feel so sad and unsure. Should I call James and get them to turn back? The journey can take up to an hour so that would mean spending most of the day faffing around which would be the exact opposite of respite. As I burst into tears, the nurse said no, they would make it work.

When James got there it was actually okay, and Ben seemed alright, and by the time James and our carer left he was happily entertained and content. We spent the weekend with Max and Molly, and realised that looking after two kids is much easier that looking after three but still pretty relentless which was quite a helpful distraction. Max burst into tears on three separate occasions because Ben wasn’t there.

Then we went out for supper to celebrate our 11th wedding anniversary, and appreciated that organising babysitting for two non-disabled kids is really straightforward. We ate delicious food, drank too many drinks, faded far too early, and came home to Molly screaming in the babysitters’ face. We had called the hospice and they said Ben was okay.

The following day we woke up to a house that only had our kids in it and us. Ben sleeps badly, and we’re lucky to have nightcarers who get up with him during the night and help us in the morning. We also have day carers almost every day which makes our family life possible. But the flipside of having a lot of help is that there is almost always someone in our house. It is a luxury to wake up and potter around in a dressing gown with only Weetabix for kids to think about.

We went for lunch, where we were just about able to have actual conversations with other adults, at tables with benches that wouldn’t accommodate wheelchairs easily. I had fun. But we were with family, and I felt bad that Ben wasn’t there. Even though we probably wouldn’t have gone for the lunch at all if Ben had been, partly because of the wheelchair, partly because trying to go for lunch with all three of our kids and actually expecting to talk to anyone is an absolutely ridiculous idea. We called again and Ben was apparently happy.

When James went to collect Ben that afternoon everything was okay. He seemed relaxed. There hadn’t been any disasters. When Ben got back home and saw me, Max and Molly he was totally thrilled. Max was so happy to have Ben back, equilibrium had been restored. Max was even content to not be able to watch his TV programmes because Ben doesn’t like them.

It was, by all measures, a success. Ben did fun stuff that he wouldn’t have done at home. Max and Molly got more of our attention, James and I had a bit of a break (it’s all relative).

So why do I feel so guilty about it? It reminds me a bit of Ben’s first week at nursery, when he was almost one. I dropped him off and called James on the way out in tears, saying I would never be able to go back to work because we couldn’t possibly leave Ben at nursery… Am I just further along the continuum of internal conflict that starts at angsting about whether kids should go to nursery or have a nanny (or any childcare at all), and ends at going away for a week with no kids? Or am I just trying to justify something that’s not fair on Ben?

I don’t think there’s a right answer, but for now I’m shattered and have a to-do list that stretches over two A4 pages and Ben was happy during this last stay, so we’ll crack on (as Max would say) and hope we’re doing the right thing.

Or at least not doing the wrong thing.