When I was doing my post-graduate diploma to become an architect, I studied at a very well-respected university in London. Through a complicated, confusing process of admissions, I ended up in a teaching unit with two eccentric tutors. They dedicated themselves to broadening the horizons of their students as widely as possible, the manifestation of which was to teach us as little as possible about buildings while having long (and occasionally unintelligible) conversations about cybernetics, pataphysics and (in the case of my work) weaving.

For me, it wasn’t a hugely successful approach and I didn’t thrive in an environment so self-consciously wacky, but I respect their intention. Life, and particularly professional life, is rarely as varied and fun as one would like so it’s important to broaden horizons before they are narrowed by the requirements of a Local Authority Planning Officer.

I carry this idea in to my parenting. I think the role of any parent is to provide as many possibilities as possible, to raise a child that believes they can do what they want and understands how big and rich the world around them is. Of course I have prejudices and opinions which I can’t help projecting on to my kids – I would like my sons to contribute, I might struggle to rouse enthusiasm for them being bankers – but I mainly want them to feel they have options.

Naturally our aspirations for Ben have adapted a bit to fit his talents. James has had to accept that the already low probability that he’d play international rugby has further decreased. But that’s okay – I have never been hugely keen on the idea of my (inevitably) slight sons being pummelled – we just need to find some alternative possibilities and role-models.

Much of the world is still open to Ben. He can read and spell at an appropriate level for his age so as long as we can facilitate his communication there is no reason that he can’t do all sorts of exciting and interesting things. Once you start to look there are lots of people with profound communication difficulties doing brilliant jobs: Stephen Hawking obviously, the media’s favourite disabled person.

I recently came across the work of Jacqueline Smith – an artist who is physically disabled – through my mum spotting something in a Printmaking magazine. Following some internet detective work, I found the Eye Can Draw project which aimed to establish greater access to printmaking for artists with disabilities in Dundee, Scotland. Amongst other things, they linked eye-gaze technology with graphic software, and then used the drawings to make prints using various printmaking techniques.

Once you think about it, it’s an obvious thing to do. But it hadn’t occurred to me. Ben uses an eyegaze computer to play games; why not encourage him to make art this way?

THIS IS WHAT IT’S ALL ABOUT. These are the people we need to know about. Not just taking Ben to art for kids and hoping/helping him to use his hands, but finding role-models, and their work, which is inspirational in both process and end result.

I loved Jackie’s prints, and I’m pretty sure I would have liked them even if I hadn’t been so heartened and inspired by her methods of production. She is a talented artist who just happens to make her pictures via some specialist technology, which itself requires skill and expertise to use. It is no surprise to me that Jackie’s work was nominated for the Lumen Prize 2014, for art created digitally.

So I bought one! I pretended to myself that it was a present to Ben. I had a very friendly email exchange with Jackie who was concerned that the scale of the print would be intimidating in a domestic environment, but I can’t think of anything better than eye-catching eye-gaze art. Let’s intimidate ourselves with the positivity of disability.

The print is now framed and yes, it is rather large. I might make it my goal to only buy pictures that are the same size as my children. 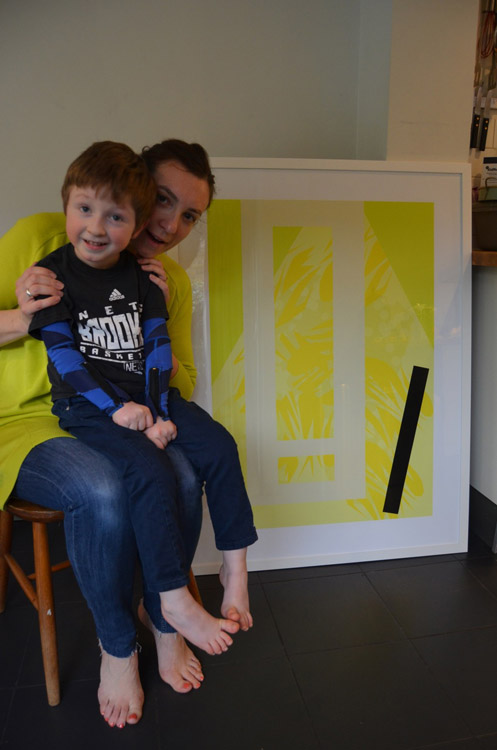 It’s (almost) the most wonderful time or the year! The night when, at 11pm, we manage to clear just enough shit from our shelves to precariously prop up 24 wrapped books!
It’s #carerrightsday, apparently. Caring comes at a cost, and often that cost is the ability to work. I am an architect but have hardly earned money in that career since Ben was born. We have been lucky that James has been able to work to support us, and I have mostly been happy to be the parent at home.
Ever since we first had Ben, James has travelled with his work. The amount has varied over the years, but I’ve often found it intense and have been low-level resentful of his absence, mostly manifesting itself in self-congratulation mixed with passive-aggression. A winning combo.
The kids have been exchanging occasional voice notes with James because he’s away at the moment. I find it’s a tough balance when one parent is away - hearing their voice reminds everyone they’re missing them, but also the kids want to know what the missing parent is doing.
Alaa Abd El-Fattah has been a political prisoner in Egypt for most of the past decade and has been on hunger strike for over 200 days. He has now stopped drinking water, as COP27 starts in Egypt, and time is running out to save him.
We have a million things going on and not enough carers (because recruitment in the care sector is a bin fire at the moment)